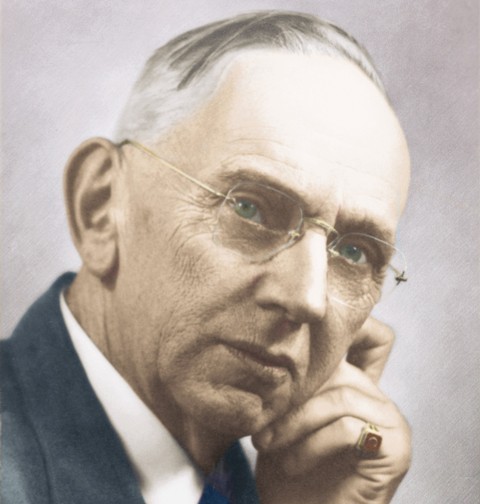 Edgar Cayce is arguably America's most successful and well documented psychic. He lived from 1877 to 1945, and during that time left verbatim written records, referred to as "readings", of 14,306 of his trance sessions. These readings were less like the stereotypical mystical trance discourses one sees depicted in the visual media and more like someone who, after falling asleep, is able to carry on a lengthy, sophisticated conversation with you - including answering questions about virtually any subject. The irony to Cayce's gift is that he always awoke from a reading with absolutely no recollection of what had transpired, thus the necessity of having each one transcribed by a stenographer. In fact, if one is not careful, there can arise some confusion as to what state of consciousness Edgar Cayce was in when the phrase "Cayce said, ...." is tacked in front of some statement or other. One might naturally ask, "Was Cayce in trance when he said that, or was he awake"?

In an effort to minimize any confusion on the part of the reader about "which" Cayce was speaking, any statement that attributes Cayce as the source will refer to the waking man, not the sleeping Cayce. Statements that are from Edgar Cayce while in trance will refer to the "readings" or "the source".1

What makes Edgar Cayce so remarkable is that even though he only had an 8th grade education, he left about 10,000 readings that were technical, detailed medical diagnoses for patients, most of whom he had never met, and outlined therapeutic recommendations for their recoveries. A large percentage of patients, particularly the early ones, came to Cayce after their physicians had written them off as "incurable". Amazingly, most of his patients that faithfully followed the recommendations he gave during his sleeping session were able to fully recover from their maladies. His patients' complaints ranged from arthritis and cancer to scleroderma and yellow fever - diseases some of which even today are still considered incurrable.

Anyone that bothers to research the records left behind quickly discerns a familiar philosophy as a medical reading unfolds. Cayce, or the source that Cayce accessed while sleeping, considered each patient to be more than just an ailing body. The readings related to each patient as having three intertwined aspects, a physical body, a mind (separate from the brain), and a spirit or soul. According to Cayce's source, the requirement of all healing, from any source, was re-integrating and re-harmonizing of those three aspects.

Keep the mind active in constructive thinking, knowing that what has been the lot or as the activities may be used for construction in the whole of the attitude towards Creative Energies. For, all healing must come from that within that is of a spiritual import. [1199-2]2

Then during the period let it be in that attitude of constructive hopefulness, and know - no medicine, no application, mechanical appliance or otherwise, DOES the healing - but that only the attunement to the divine within BRINGS health. [261-27]

For first in spirit, then in mind the builder, may there come - even as then - the healing forces for the entity through the applications of that which IS the healing power in mechanical means, in the spirit, or in the chemical and in the elementals or the vapors that become a part of every experience before it becomes a manifested form. [1215-4]

Know this; that all healing of every nature must come from a mental attitude created by either that activity within the system as food, as medicine, as activities, the principle of which is constructive in aiding those deficient portions to become coordinant with the rest of the system for constructive forces. [1436-1]

The Medical Technology of the Readings

A lot of the therapy recommended for patients in the Cayce readings consisted of what one might call "herbal remedies", which the readings formulated for each patient. The readings would also use relatively common materials in fairly unstandard ways, such as with Castor Oil packs. However, some of the technology recommended, and designed, by the readings was very unique and unusual. In particular, two of the devices "invented" by the readings were the Radio Active Appliance and The Wet Cell.

A cursory examination of the two devices would lead one to say that they are just a dry and a wet battery, respectively. However, a closer examination of each device reveals that neither can be truly called a battery, or really any kind of an electronic circuit using standard electro-magnetic theory. Some have said, for instance, that the Radio-Active Appliance is simply an RC (resistor-capacitor) circuit, where the glass and the steel bars represent the capacitor and the carbon plates surrounding them represent the resistor. Others say that the Wet Cell is simply an electrochemical battery consisting of two poles in an electrolytic solution. However, neither analysis holds water. (This will be discussed further in the Radio Active and Wet Cell appliance sections.) So, if the appliances do not operate under standard electromagnetic laws, under what laws are they working?

While the two appliance's construction parameters don't make much sense when viewed through the conventional lense of electro-magnetic theory, several aspects of their design have striking correlations with the discoveries documented by Baron von Reichenbach in his work with understanding the phenomenon he termed The Odic Force. The correlations are so striking that we are using the Reichenbach's research to establish a baseline to explore the workings of the two Cayce appliances. Even Edgar Cayce's son, Edgar Evans Cayce, who worked as an electrical engineer for Virginia Electric and Power Company considered the connection with von Reichenbach's Odic Energy:

I have heard of theory of "odic" force but somehow believe that any such energy must be related somehow to the forms of energy we are familiar with (don't know how or even if). As far as sensitives being able to detect such force how do you know they are not "seeing" an electromagnetic or electrostatic field? We can't see radio waves but if we were sensitive to them somehow am sure we would be overwhelmed by the vast amount of radio and TV energy we are pouring out of our many stations. Of course there may be some odic or other energy we are not familiar with and this may be what appliances deal with but believe we need to do more experiments with these devices and see if we can measure their effects on body or body energies we are familiar with and then derive their source of energy.

While the Readings made reference to the "odic sphere" in a single reading3 as something like an envelope that surrounds this solar system and on which all of our thoughts and actions are recorded, he doesn't otherwise refer directly to Reichenbach or the energy he dubbed as "Odic Force". The readings do, however, refer to a similar energy as 'ether'. We think it is significant that the readings used that term "ether" even though the scientific community had abandoned the concept for several decades prior. We assume that the readings used the term because it was the only word in the English language that approximated the concept that he was trying to express. The concept of ether in the Cayce readings will be pursued in more detail in the Ether Section.

As it turns out, the two appliances mentioned above are not the only unusual techology that can be found in the readings. Several inventors came to Cayce for readings on their inventions. Some who had an almost working prototype, and others with just ideas. One of those ideas was for a device known as an Etheronics Machine, originally designed by a Dr. Paul Cold, in apparent collaboration with T.Michell Hastings of New York. The readings also gave specific instructions on how to build an opto-mechanical device that would allow almost anyone to view the human aura. Over the years that Edgar Cayce gave readings he was asked to advise on many inventions ranging from aerials to zippers. A lot of the advise bordered closer to business advice than scientific inquiry, but some of the questions were very intreging. The following is a list of some of the more esoteric devices described in the Cayce reading:

Besides the advice given by the Readings for the various inventions, there were several individuals that queried the Source for a better understanding of Ether and the science that governed it. These Q & A sessions will be expanded upon in the Ether section as well.